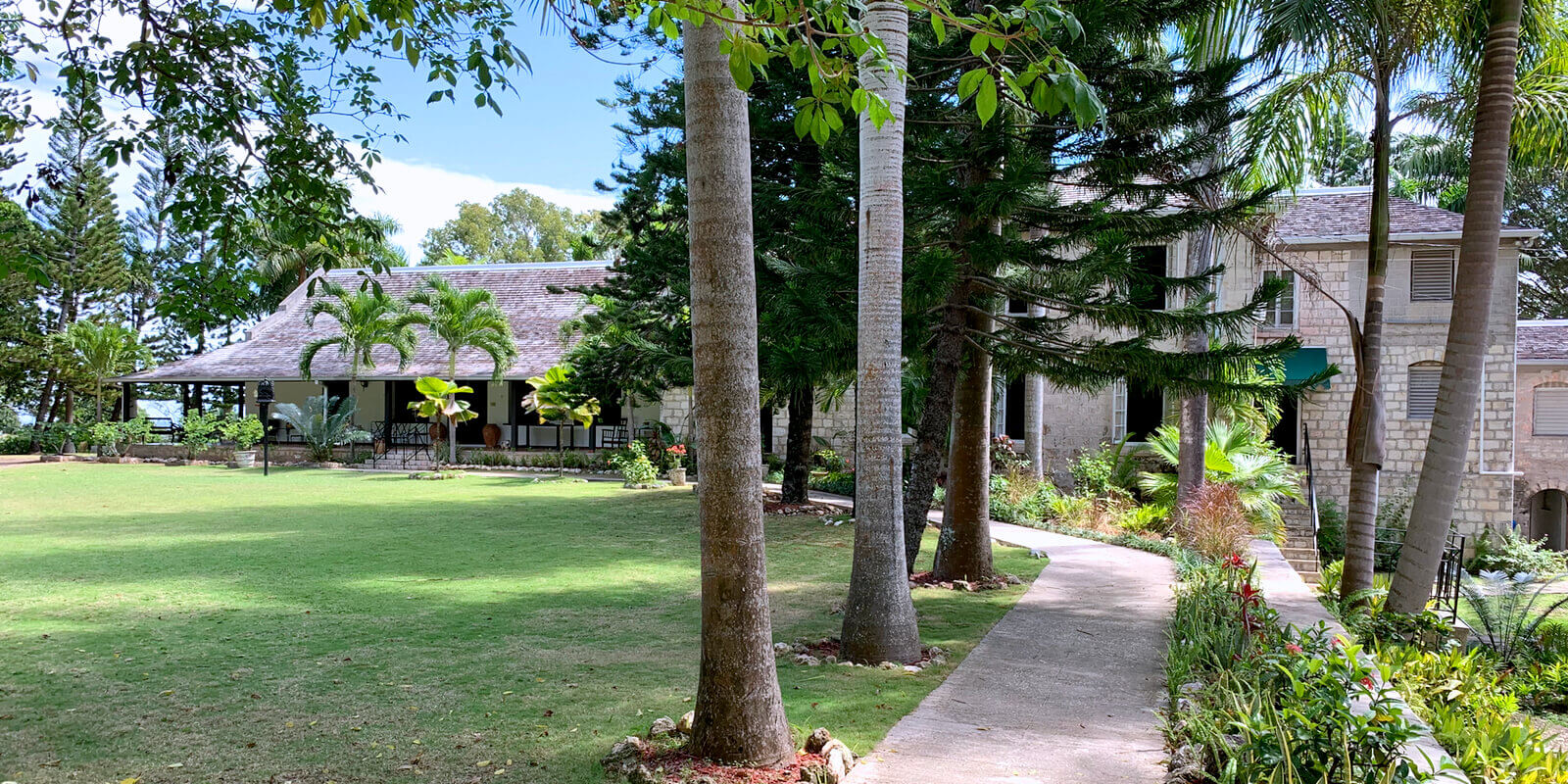 Located amongst trees of mahogany, pimento and other local varieties, in the hills above the Rose Hall Great House, sits Cinnamon Hill Great House, a warm and charming house with a commanding a full view of the coast.

Samuel Barrett (Jr.), owner of the Cornwall and Cinnamon Hill estates in St James, started building the Cinnamon Hill Great House in 1734, but he died in 1760 before it was finished. He is buried on the property. The building was completed by his fourth son of 15 children, Edward Barrett, in 1784. Edward became one of Jamaica’s wealthiest and most influential planters and it was his generation of Barretts, and their children, that played a significant role in the birth and development of Falmouth, the capital of the neighboring parish of Trelawny. It is also from his family lineage that the famous poet, Elizabeth Barrett Browning (1806-1861) sprung (see inset for one of her most famous work).

The property passed through several owners; the Barretts, George Robertson, Joseph Shore, the Henderson family, until it was finally purchased in the 1960s by John Rollins who sold it to Johnny Cash, the country and western singer, in the early 70s. It became his family home, his Jamaican hideaway, for the next 30 years until his death. It was subsequently repurchased from his estate by the Rollins family, and is today now open to the public for tours (operated through Rose Hall).

The house is located on the back nine of the Cinnamon Hill Golf Course. It is decorated and preserved just as it was when the Johnny and his wife lived there, presenting an intimate glimpse into how they lived. It is as if Johnny and his wife June had just left for the weekend. The home feels lived in, with personal effects such as a pair of Johnny's shoes shoved in a corner, family portraits hanging on the walls, and personal momentos lining the shelves.

The Cinnamon Hill Great House is one of the few that survived the 1831 slave revolt, which destroyed most of the great houses on the island. Only a handful are left out of the more than 700 that existed. It is these riots that brought the horrors of slavery to the attention of the British public, helping to lead to its abolition.

The original house consisted of the single-story portion to the left of the picture above (west). It was constructed of cut stone and contains the dining and living room.

The two-story portion to east (right), was added later in the century between 1780 and 1785 and contains a sitting room and several bedrooms. The kitchen today, is also located in this wing, but would have been a separate building from the main house in the original building. Kitchens in that period were generally built as a separate structure from the main house to prevent the risk of fires as well as reduce the heat in the main house.

There is a large verandah to the front and the rear of the house. The front verandah would have provided an excellent view of the ocean.

The rear verandah faces the main gate to the back of the house and wraps around the house on the west side where it meets a hurricane shelter.

The hurricane shelter was created by a countoured wall and roof on the north-west corner that juts away from the house for several yards to an apex where it then sharply doubles back on itself, towards the house creating a triangular structure with 2 sides in the yard and the third adjoining the house.

Inside of the Hurricane Shelter. The internal room of the shelter was converted by Johnny cash into a bathroom.

The floors throughout the house are made of hardwood, which is likely mahogany, stained red and polished to a very high sheen. The build up of polish over the years have totally filled the joints between the boards in places. This presents the effect of a mixture of smaller boards adjoined to larger planks aged with imperfections, creating a charming overall effect of warmth.

The staircase in the two-storey wing is made of hardwood. The walls up the stairs are the same dark brown color and wood as the balustrade. The steps by contrast are stained and polished to the same red color and sheen as the floors found throughout the house, creating a beautiful contrast to the darker colors of the wooden casement, balusters and handrail. 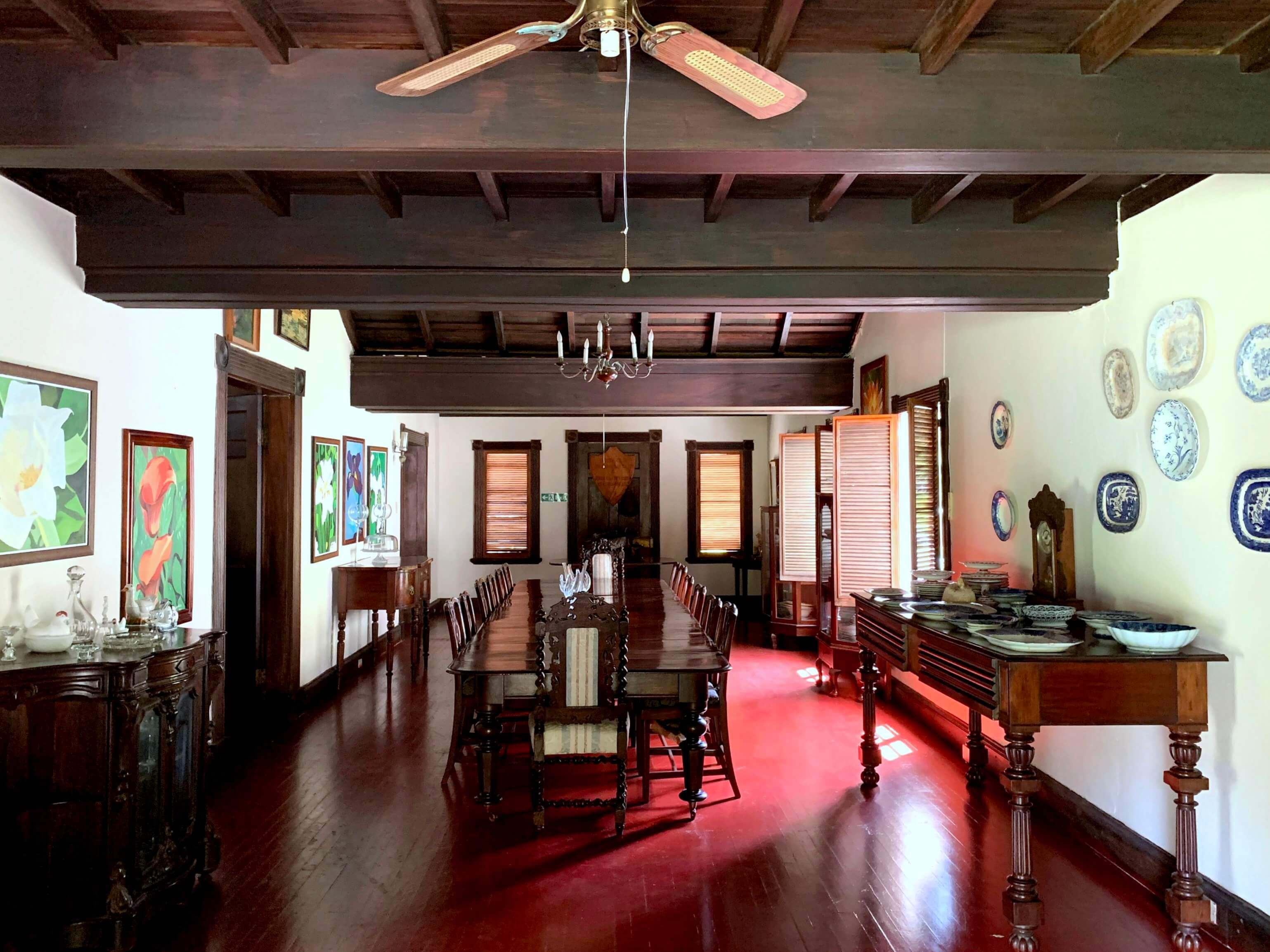 A separate detached building to the southeastern corner of the house was used by June Carter, Johnny's wife, as a sewing room.

Pictured above: The Sewing Room.
June Carter was an avid seamstress.

Hersey Barrett had two sons; Hersey who was born in 1650 in England, and Samuel, born in Jamaica in 1662 and the patriarch of the family lines of Barretts in Jamaica. Samuel died at the age of 32, in the battle with the French at Carlisle Bay on the south coast of Clarendon. His son, Samuel Barrett Jr. started building the Cinnamon Hill house but died before it was completed. The house was completed by his son, Edward Barrett. For more information about the Barrett family see the family tree link below.

Edward "The Builder" Barrett completed the Great House at Cinnamon Hill and established the Barrett family fortune on the north side of Jamaica. He expanded the family land holdings to 10,000 acres with the Cinnanmon Hill, Oxford and Cambridge Estate in St James. He played a significant role in the birth of Falmouth. The parish of Trelawny was carved out of portions of St James and St Ann, and the capital at that time was the village of Martha Brae, about a mile and a half upriver. The location of the capital was not ideal for trade, so a decision was made to establish a seaport on lands owned by Edward. The seaport was named Falmouth, after Falmouth in England where Governor Trelawny was born. It soon became recognized as a major port of entry, clearance and freeport (open to all traders), like Montego Bay further west. It replaced Martha Brae village as the Capital of Trelawny in 1790.


The past is palpably present in and around Cinnamon Hill, the reminders of other times and other generations everywhere, some obvious, some not. For more than a century this was a sugar plantation worked by thousands of slaves who lived in clusters of shacks all over the property. All that remains of those people now, the metal hinges from their doors and nails from their walls, lies hidden in the undergrowth on the hillsides or in the soil just below the manicured sod of the golf course that loops around my house. I doubt that the vacationers playing those beautiful links have any idea, any concept, of the kind of life that once teemed where they walk—though perhaps some do, you never know.

Hanging on the wall of the library, which was used by Johnny as a breakfast room, is an article about Edward Barrett's grandson, Richard Barrett who grew up in the Cinnamon Hill Great House. It refers to a newspaper article in the Jamaica Courant published March 23rd, 1833, about Richard's representation of the plantation owners interest to England's parliament in the face of the looming prospect of abolition. Richard who built Greenwood Great House, was chosen to represent the Jamaican legislature before the English parliament on the issues of emancipation. He was also an owner of slaves, but he had shown them kindness and consideration and in 1826 had used every effort in the Assembly to abolish the use of the cart whip in the chastisement on the slaves. He held several offices in the Government of Jamaica, including Custos of the parish of St James.

The Original Article from the Jamaica Courant, Saturday March 23rd, 1833.