The Barretts in Jamaica's History

The Influence of the Barrett Family on Jamaica's History

The family home survived the 1831 uprising when many of the Great Houses on the island were torched, owing in part to the way they treated the enslaved people [ more... ]


The first Barretts were an extremely wealthy and influential English family in Jamaica, owning more than 84,000 acres of land and 2,000 slaves in the parishes of Trelawny and St. James when Sugar was King. They prospered in politics, real-estate and commerce.

The first Barrett, Hersey Barrett, settled in Jamaica in the 1660s after being granted lands by the King of England for his service in the British Navy, led by Admiral William Penn and General Robert Venables. He was an officer in the unsuccessful raid of Hispaniola (island of Haiti and the Dominican Republic) in 1655. Later that same year, Jamaica being much less fortified, was captured by the British from the Spaniards and Hersey Barrett was granted lands in Jamaica, by the King of England.

The first recorded land patent in the Barrett name was recorded in 1663 in Spanish Town, granted by King Charles II to Hersey Barrett,who was also the great-great-great-great grandfather of Elizabeth Barrett Browning, the poetess of 50, Wimpole Street in London. Hersey was granted land in Spanish Town, and was later buried in the Cathedral. He also owned land in Clarendon that stretched from Carlisle bay to Milk River. This likely accounts for the reason why his son, Samuel was killed defending Carlisle bay from the French.

Hersey Barrett had two sons; Hersey who was born in 1650 in England, and Samuel, born in Jamaica in 1662. It is from Samuel that the lineage of Jamaican Barretts sprung.

In 1694, the French landed a force of over 1,400 men on the southern coast of Jamaica at Carlisle Bay in south coast of Clarendon. They were met by militiamen, initially about 250 men one of whom was Samuel Barrett, who without support from regular army units repulsed the French. About 100 militias were killed or wounded with the French suffering losses between 150 and 350.

Samuel Barrett (Sr) was one of the casualty of the invasion. He died at the age of 32, leaving three children; Richard, Anne and Samuel.

Samuel Jr. acquired land on the Northcoast in St. James and married Elizabeth Wisdom, from a family of early north coast settlers who owned land near Martha Brae in St. James. They had 15 children, one of whom was Edward Barrett their fourth son, born in 1734. Samuel Jr. started building Cinnamon Hill Great House but died before it was finished. He was buried on the property.

Edward completed building the Cinnamon Hill Great House that his father, Samuel (Jr) started. He became one of Jamaica’s wealthiest and most influential planters. It was his generation of Barretts and their children that played a significant role in the birth of Falmouth. In 1770, the parish of Trelawny, was carved out of portions of St James, and St. Ann (see the evolution of Jamaica Parishes). The first capital was Martha Brae, an area of the island where Edward's maternal family owned property.

Edward married Judith Goodin and had a daughter, Elizabeth Barrett and a son Samuel Goodin Barrett. Elizabeth married Charles Moulton, the son of a captain of a man-of-war ship in the West Indies squadron and Samuel had 3 sons with his partner Elizabeth Barrett Williams nee Waite.

Samuel Goodin Barrett had three sons with Elizabeth Barrett Williams, a widow to whom he was never married. One of the sons was Richard Barrett, the influential owner of Greenwood Great House.

Samuel’s children carried the stain of "illegitimacy" within the Barrett family, and while some financial provisions were made in the family's will, the bulk of the wealth was passed instead through the female line to the family of Elizabeth Barrett. 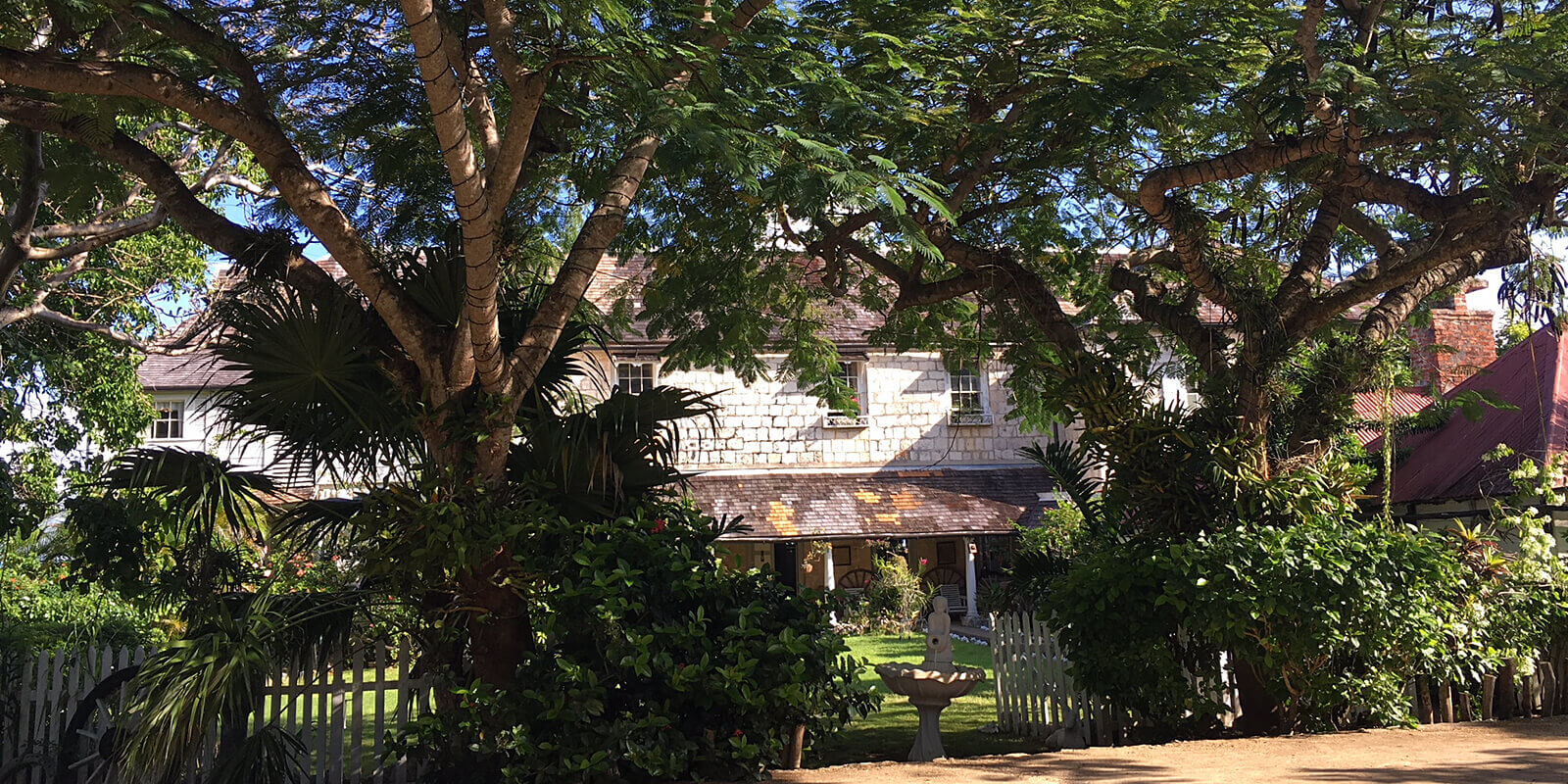 The home is probably the best preserved of the original Great Houses, having survived the 1831 uprising when many of the Great Houses on the island were torched. Like Cinnamon Hill, the Barretts oldest surviving family home on the island, it was likely spared because of how the family treated the enslaved people [ more... ]

Richard Barrett, who built the Greenwood Great House, was the son of Samuel Goodin Barrett. He owned two sugar plantations in St James; Greenwood and Barrett Hall. He became magistrate in 1816, before being promoted to Chief magistrate (or custos) in 1825. He was a member of the Assembly in both St James (1815-1819 and again in 1826) and Trelawny (1822-1824). He was elected Speaker of the House in 1830 and remained a prominent figure in politics until his death in 1839.

Richard was chosen to represent the Jamaica legislature before parliament on the issues of emancipation. Even though he himself was an owner of slaves, he had been kind and considerate to his slaves and in 1826 had used every effort in the Assembly to abolish the use of the cart whip in the chastisement on the slaves. It is acts such as these that may have spared Greenwood from the torch during the uprising.

The surname of the boys were legally changed to Barrett, in 1798 to preserve the legacy of their grandfather, a step that was likely deemed necessary because of the circumstances surrounding the offsprings of Samuel Goodin Barrett. Of Elizabeth's three children, only Samuel returned to Jamaica after being a member of parliament in England, to oversee the family plantation and business in Jamaica.

Edward Barrett, Elizabeth's father and grand-father of Pinkie, Edward and Samuel, had become one of Jamaica’s wealthiest and most influential planters. He was determined to preserve his plantation "empire" and his family name but his only "legitimate" male heirs were Elizabeth's two sons, Edward and Samuel whose surname was Moulton. So in 1798, under Royal Licence and Authority, it was changed to Moulton-Barrett. The grandfather died later in that year, and the two boys inherited the bulk of his estate.

Edward Moulton-Barrett was the father of the famous poetess Elizabeth Barrett of Wimpole Street, wife of Robert Browning. His annual salary from the plantations in Jamaica exceeded 60,000 pounds per year when he moved to Wimpole Street London.

He was a reserved man active in community affairs. He was twice elected, in 1812 and 1814, as Sheriff of Herefordshire, England. Starting in the mid-1820's, he ran into several misfortunes that changed his life. Financial problems in Jamaica led to the loss of Hope End an expansive estate he purchased near Ledbury, Herefordshire; the death of his wife in 1828; the death of his brother Sam in 1837; and the deaths of his sons Sam and Edward in 1840. After losing the Hope End Mansion and Park in 1832, he took his family first to Sidmouth and then to London, finally settling in 1838 at 50 Wimpole Street, where he resided until his death.

Samuel, the younger of the two brothers oversaw the family plantations and business. From about 1811 he traveled between England and Jamaica and became the indispensable custodian of the Moulton Barrett interests. History credits him for reforming the conditions for slaves on their plantations. They abolished the whip, appointed a negro overseer and built houses and schools for their slaves.

He was a Member of Parliament for Richmond Yorkshire in 1820-1827. The History of Parliament records the following: 'The dilemma of being a slave-owning Whig never weighed lightly with him, and he reformed the regime under which his estates were run. He abolished the whip, appointed a negro overseer, built decent houses, schools and churches for his 1,100 slaves, and encouraged Nonconformist missions. As a result, his property survived almost intact during the uprisings of 1831-2.8 Throughout his life he maintained a close relationship with his niece Elizabeth Barrett Browning, the poet. He died at Cinnamon Hill in December 1837. He left his house at Montego Bay and an annuity to his wife and the remainder of his Jamaican and English estates to his brother. Limited probate was granted on his estate in England, which was sworn under £9,000.10 After his death his friend Peter Duncan wrote that he was ‘a gentleman of great intelligence and liberality, and also a true friend to the religious instruction of the slaves’.

Elizabeth Barrett-Browning, daughter of Edward Moulton-Barrett, suffered throughout her life from an undiagnosed illness that led to a dependence on painkillers. She grew up at Hope End, her father's estate in Herefordshire that he had to sell because of financial difficulties. The family moved back to Wimpole street before her marriage to Robert Browning. She was very close to her uncle, Samuel Barrett, who left her an endowment when he died, she also received an inheritance from her grandmother's Jamaican properties.

Her father disliked Robert Browning, whom he viewed as a fortune hunter. Most of the courtship was conducted in secret and on September 12, 1846, while her family was away, Elizabeth met Robert at St. Marylebone Parish Church, where they were married. She returned home for a week, keeping the marriage a secret, then fled with her husband to Italy. She never saw her father again.

Elizabeth Barrett Browning (1806-1861) was one of the most famous and prolific poets of the Victorian period, with works spanning 40 years. She wrote about industrialization, slavery, political leadership, religious controversy, the problems faced by women in society, and what it was like to live in the modern world. She always questioned and judged conventional views and was never concerned that she might offend readers by what she had to say.