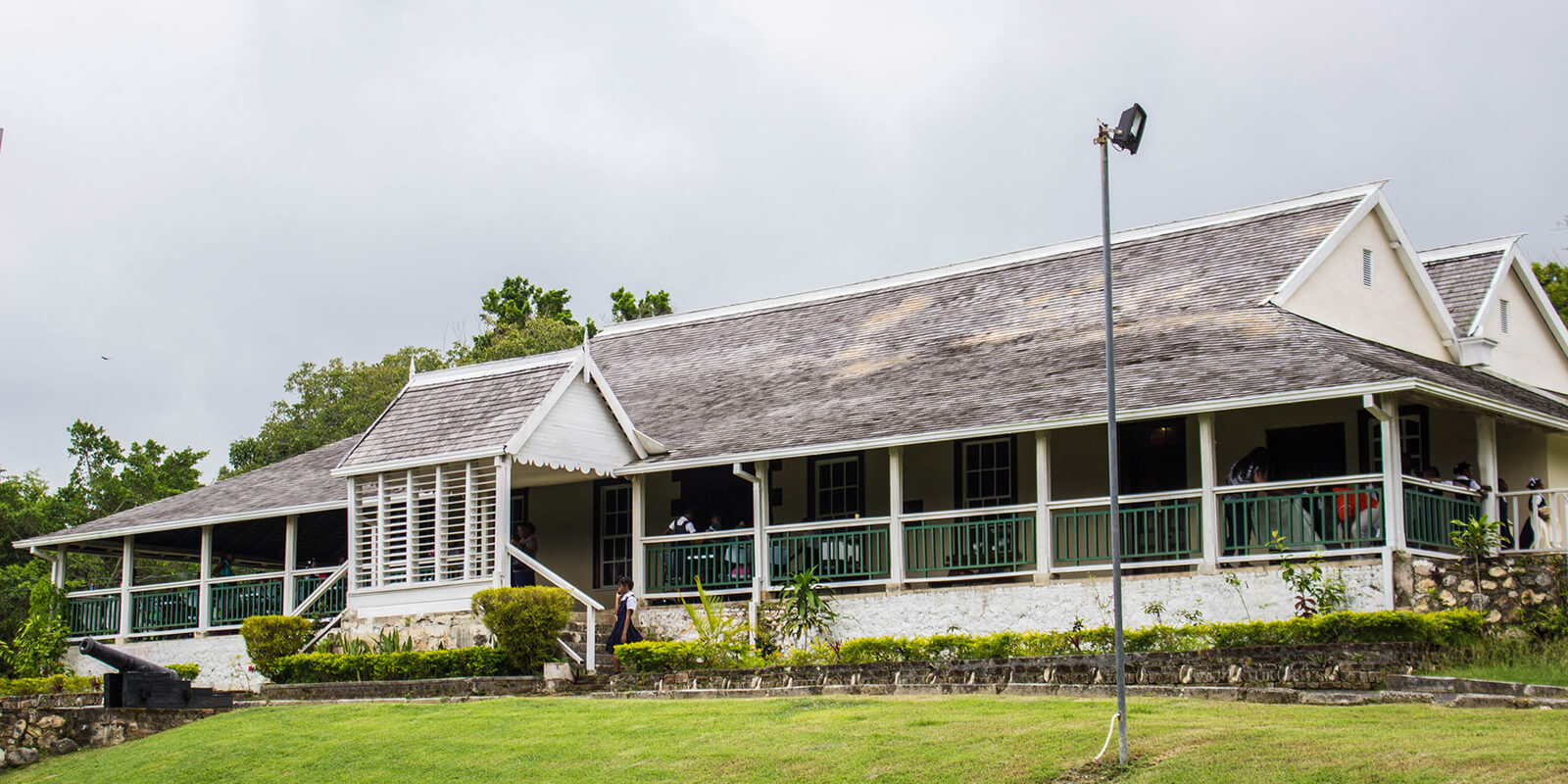 The Seville Great House is located in the most historically significant area of Jamaica. The land on which it sits encompasses thousands of years of the island's history, having been occupied years before the "new world" was discovered.

It contains the remains of Maima, an indigenous Taino village that Christopher Columbus encountered upon first landing in Jamaica in 1494. It was the first 16th century Spanish settlement in Jamaica, called Sevilla la Nueva (New Seville), the first capital of Jamaica under Spanish rule, one of the first sites in the region to receive a steady flow of African slaves and the location of the post-1655 British sugar plantation known as Seville.

Today, the Great House, is the center point of the Seville Heritage Park, home to a museum showing an interpretive exhibition of the property's history from the earliest evidence of human presence in the area, about A.D. 650, to the beginning of the twentieth century. The 300 acre park, owned by the Jamaica National Heritage Trust, is located on the north coast of the island approximately 1.25 miles west of the town center of St. Ann's Bay and about 5 miles west of Ocho Rios.

Internationally, the park is considered a important microcosm of the lifestyle of an indigenous people and the transformative years brought about by colonization, slavery and sugar to Jamaica and the the Americas. It is listed as "tentative", on the UNESCO World Heritage Site list, an inventory of properties that each State Party intends to consider for nomination.

The original building was initially a two-storey structure when it was built in the 1670s. As was the custom of the time, it was built in a location with an elevation that is higher to that of the coastline to afford an expansive view of the Caribbean sea, as well as to capture the cooling winds from the ocean during the hot tropical days.


The building suffered significant damage during a hurricane in the 1700s and in an effort to make the house more adaptable to the environment and more resistant to the natural forces of nature, the entire upper floor was removed and a low roof installed on the first floor. A wrap-around verandah was added to allow for the circulation of the cool breeze throughout the house and an extension added to the rear.

The building has been augmented at various points throughout its history and as a result has elements of of various periods. A protracted entrance portico extends from the verandah, with stone steps leading to a floor of tiles from the Victorian period of the 19th century. The interior of the house has mahogany arches separating the living and dining rooms. Interior doors are constructed of mahogany with raised panels. Windows are predominantly sashed, with modifications such as jalousies added. The flooring is a mixture of timber and tiles.

The roof is finished in cedar shingles, with a distinct cap and comb feature covering the apex of the roof.

The original Spanish colony called Sevilla la Nueva was located near the Taino Village of Maima. It was later called Neueva d'Oro in anticipation of finding gold. It was later relocated closer to the sea by the Spanish Governor, Francisco de Garay, around 1518 who simplified the name to Sevilla. The lands forming the new settlement stretched from the fertile alluvial coastal plain in the north to the limestone highlands in the south. The Church River, now a small stream flowed from the southern highland across the plain into St. Ann's Bay. The settlement included the land on which the present day Great House still stands. The area today can be grouped into three categories:

Above: Painting depicting historical reconstruction of Maima and Sevilla la Nueva, c. 1525. by Peter Dunn
View: North (bottom of screen) to South. The original Spanish colony Sevilla la Nueva (aka as Sevilla d'Oro) was in the Taino Village of Maima (X). It was relocated closer to the sea by the Spanish Governor, Francisco de Garay, around 1518 who simplified the name to Sevilla. He built himself a castle (1) and by 1525, Sevilla was a small colony with a stone fortress, a sugar factory (2), artist workshop (3) and Franciscan monastery (4).

Some of the more interesting archaelogical finds and landmarks are presented below.

The castle or fort is the most prominent foundation at the site. It is believed to be the residence of the Spanish Governor in Jamaica. The structure was built with cut blocks of limestone. The building is dominated by a large rectangular room ~63ft by 21ft, as well as other smaller rooms. A well is situated in the northwest corner of the large room. During the initial excavation in 1937, carved limestone blocks were unearthed in the well. The blocks have features resembling gargoyles, a dog, a carver coats of arms and molded brick works representing qulaity craftmanship.

The Spanish settlement is located about 300ft south of the Governor's castle [Orientation: North (bottom) to South (top)]. Faint traces of the structural remains are visible on the landscape. Under excavation, they reveal the layout of living and work space for the entire town of Sevilla. Research in this area continues.

The sugar mill was first excavated in 1964, and is situated about 500ft southwest of the ruins of the Governor's Castle. Based on the archaeological evidence, it was hypothesized by archaelogists that this was an Egyptian type mill with two vertical gear wheels fitted into spaces between arches and a horizontal gear above.

Just east of the sugar mill, an artisan workshop site was excavated in 2002 and hundreds of incomplete carved stones and broken columns were uncovered. These elaborate carvings provide a glimpse into the grandeur of Sevilla, or its planned grandeur under Spanish rule. It also highlights the artistic competence of the natives and/or Africans who presumably made some of the carvings under the supervision and guidance of the Spaniards.

Construction of the church of Peter Martyr, the first abbot of Jamaica, began in 1525. Records show that the structure was never completed possibly because of a Taino uprising or possibly because of an attack from the French in 1554. In the 1940s the walls of the Peter Martyr church were taken down and the stones were used to build the existing church just east of it. This present church reflects elements of the initial Spanish church design.

Seville Great House still standing today. Built in the 1670s, was initially a two-storey structure built in the Georgian tradition.

An old African cemetery, was partially excavated between 1987 and 1991.

The Arawaks, also called Tainos, came to Haymaica (their original name for Jamaica) from South America about 2,500 years ago. The name meant "land of wood and water”. They grew cassava, sweet potatoes, maize (corn), fruits, vegetables, cotton and tobacco, which was grown on a large scale as smoking was a popular pastime. Villages were built all over the island with most settling on the coasts and near rivers as they fished for food.

1494 - Christopher Columbus and the Spanish

On May 4, 1494 Christopher Columbus, on his second voyage to the West Indies, came in sight of the island which the Taino of Cuba had mentioned in 1493. The Cuban Tainos called it Yamaye, wheareas the Tainos of Jamaica called Haymaica. The Spanish named it Xaymaica, or Santa Gloria.

The record of Columbus's first sighting of Jamaica, is still today, a true description of the island:

..there silhouetted against the evening sky, arose sheer and darkly green Xamayca. It is the fairest island that eyes have beheld: mountainous and the land seems to touch the sky…"

Tainos and the Nina by Peter Dunn

Nine years later, with two ships already abandoned in Panama after a year voyaging, and the remaining two no longer seaworthy, the ailing 52-year-old admiral barely made it to the still undeveloped bay on the north coast of Jamaica on June 24, 1503, where he remained shipwrecked for a year and five days, chronicled in his letter to the King and Queen of Spain, written in Jamaica while shipwrecked.

In 1508 Jamaica was designated the property of the Columbus family in partial settlement of an ongoing legal dispute between the explorer and the Spanish crown. In 1509, the son of Christopher Columbus, Diego Columbus appointed Juan de Esquivel as governor of the island. He arrived with 80 citizens and their families and the colonization began in earnest. They developed the parish St. Ann and constructed the first European town in Jamaica, Sevilla la Nueva (New Seville). They constructed a fort, a cathedral, a governor's palace and a sugar works all within Sevilla la Nueva. In 1534 the capital was moved to Villa de la Vega (later called Santiago de la Vega), now known as Spanish Town.

Diego Columbus is said to have laid the earliest stones in building the city but he died before the completion of the town.

By 1511, the Spanish crown insisted that the settlers enforce “encomienda” or the right to demand forced labor from Indian inhabitants. The Taino were forced to work for the Spaniards and each settler was allowed to have between 150-200 Tainos for constructing buildings, farming, mining, and transportation. The Taino population soon succumbed to the punishing work, the cruelty of the Spanish and to European diseases for which they had no natural defense. Their population quickly diminished, and as a replacement, the Spanish brought African slaves to Sevilla la Nueva.

The island remained poor under Spanish rule as few Spaniards settled there; the promise of finding gold did not materialize. Jamaica served mainly as a supply base to support the efforts in conquering the American mainland. Towns were little more than settlements and the lack of attention to the colony led to internal strife that contributed to the weakening of the colony in the last years of Spanish occupation. The governors were not getting proper support from home and quarrels with church authorities undermining their control.

On May 10, 1655, Admiral William Penn and General Robert Venables led a successful attack on Jamaica. The Spaniards surrendered to the English, freed their slaves and then fled to Cuba. It was this set of freed slaves and their descendants who became known as the Maroons.


Captain Samuel Hemmings, who played a role in defeating the Spanish was granted 2,500 acres of land that included Sevilla la Nueva, and the name was changed to Seville. Hemmings built the New Seville Great House in the 1670s along with the first slave village located a short distance away.

The historical record shows that by the 1690s, Hemmings had established an extensive sugar works with sugar cane being cultivated on 300 to 400 acres of land along the coast, along with warehouses and wharves on the waterfront. The estate also produced lime, livestock, and food crops for consumption on the estate.

His grandson later further developed the area including renovations of the Great House, slave village and successful sugar mill. The sugar mill continued to operate by African slaves until slavery was abolished in 1838.

After Emancipation, Protestant reformers purchased part of the estate and turned it into a free settlement called Priory. Former slaves lived in the settlement and occupied it until the 1890's.

East Indian laborers were brought to Jamaica to continue the operation of the Seville Plantation. This resulted in two contemporaneous labor communities at Seville in the post-emancipation period. An East Indian House where these workers lived was discovered accidentally through archeological excavation of the first slave village at Seville. It is the first such house excavated in the Western Hemisphere.