The Georgian style, with its identifiable symmetry and formal classical details, was the most prevalent style in the English colonies throughout the 18th century. The style, popular in England during the 18th and 19th centuries, is based on the classical forms of earlier Italian Renaissance period. As the style spread to the colonies, it became identifiable with colonial growth and its influences can be seen in many building types from the plantation era in Jamaica; from private residences to schools, courthouses, libraries.

We will first look at the common features of the classical style, then explore modifications that adapted it to the local conditions of the colonies such as Jamaica. The more common classical features include:

Gabled Roofs; side-gabled or hipped
Symmetrical placement of windows (Fenestration)
Multi-paned windows (6-20 panes in each sash)
Stone or brick walls
Transom window over a paneled front door
Pediment or crown and pilasters at front entry
Cornice with dentils
Corner quoins (masonry blocks at the corner of a wall)
Water table or belt course (aka string course) 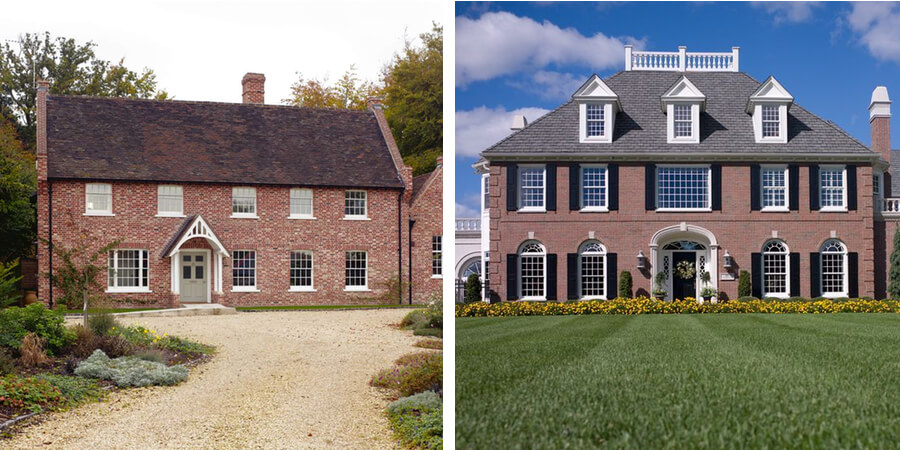 A gable roof has two sides sloping to the wall, that come together at a ridge at the top, creating vertical triangular ends. A hip or hipped roof, has all sides sloping towards the walls. 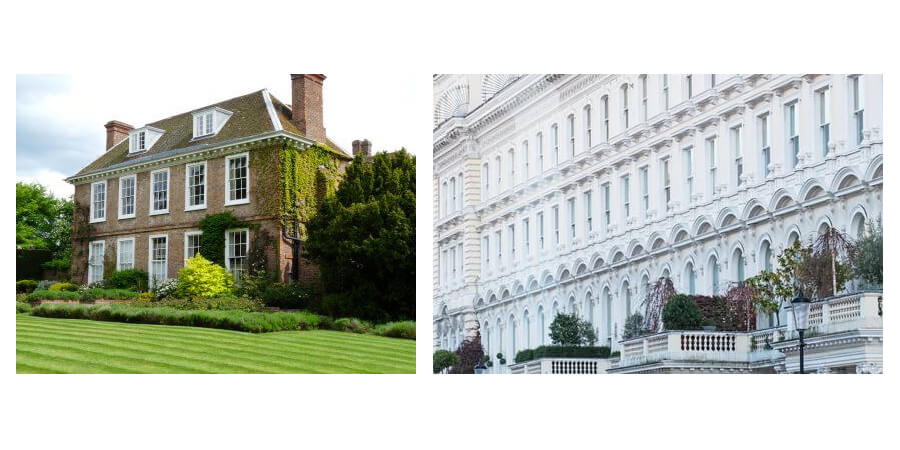 Symmetry is an important element in Georgian style. The arrangement, proportioning, alignment and design of windows and doors in a building are an important feature. 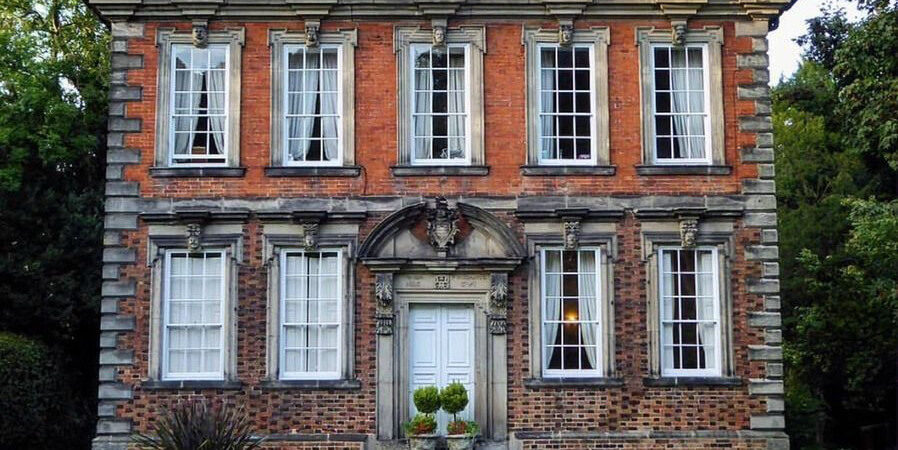 Windows typically have multiple panes ranging from 6 to 20 in each sash. 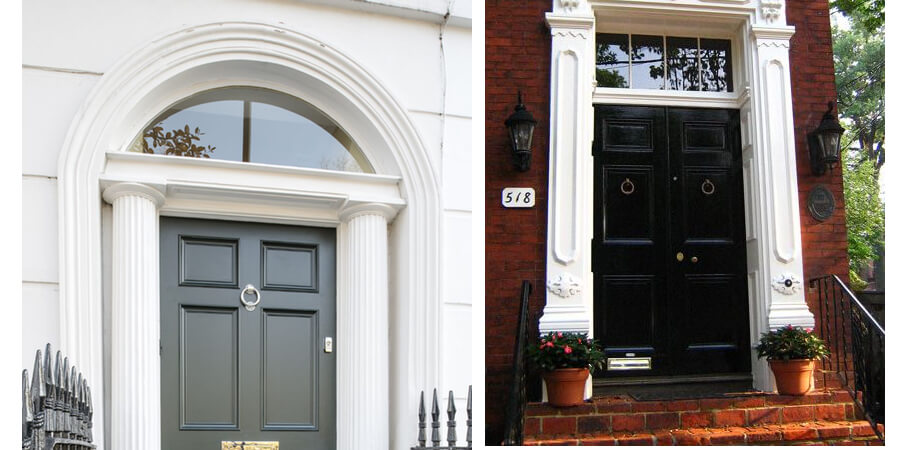 Pediment or Crown and Pilasters at Front Entry 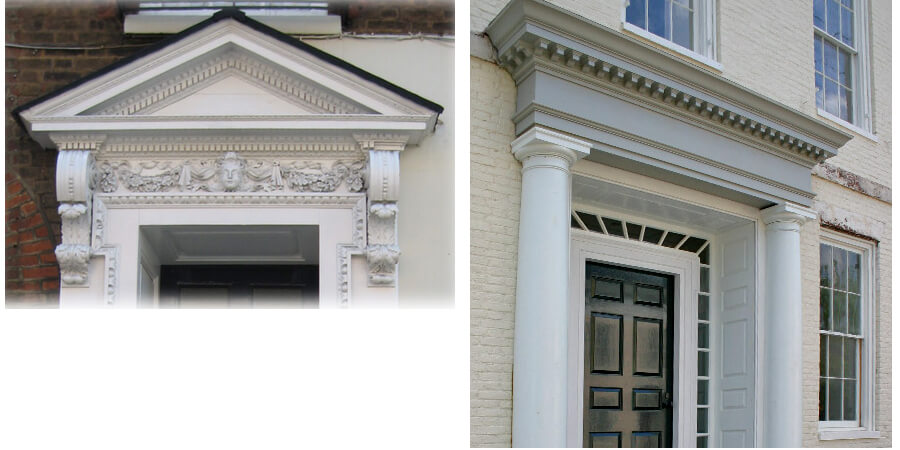 The front entry is often decorated with a pediment; an architectural triangular section above the entry way. It is most likely triangular or segmental, or partially rounded and on some rare occasions will be "broken" or open at the top. The pilaster is an architectural element used to give the appearance of a supporting column. It is most often rectangular in Georgian styles. 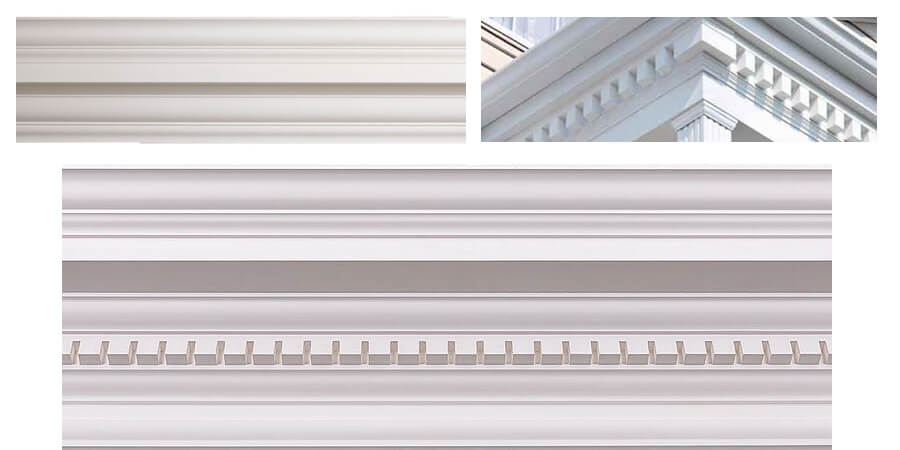 The cornice is the decorative molding that stretches horizontally along the top of the building or entry way feature. A dentil, is a small rectangular block used in a repeating ornamental pattern often in the bed-mould of a cornice. 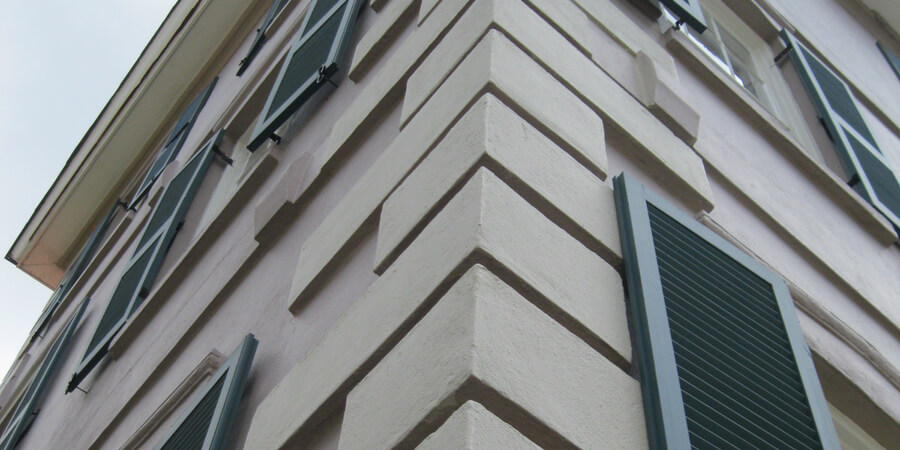 Quoin, which means "corner" in French, is a feature found on the corner of the building's exterior. These cornerstones are often decorative, but can also be structural since they usually differ in jointing, color, texture, or size from the masonry of the adjoining walls. 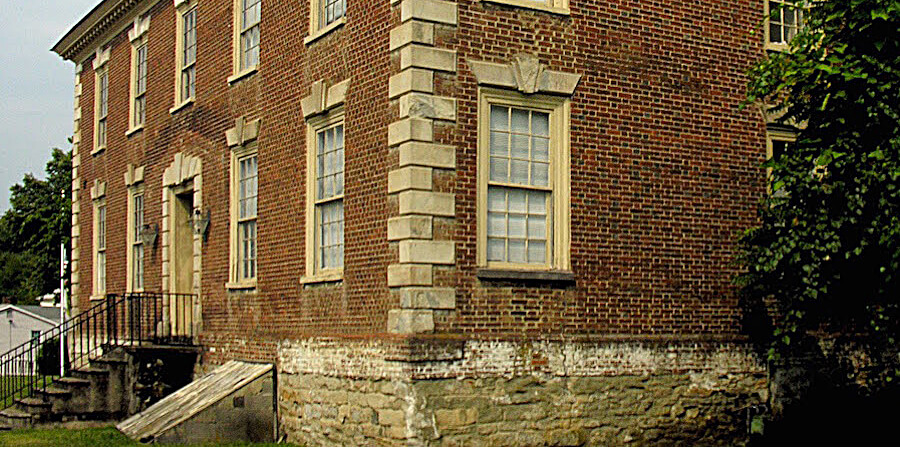 A water table is a course of brick or stone with a sloping top to cast water away from the foundation. A belt course, (or string or still course) is a continuous row stones or brick set in a wall. It is often used to help accentuate the horizontal line of a window and/or the separation of floors in a multi-story house. 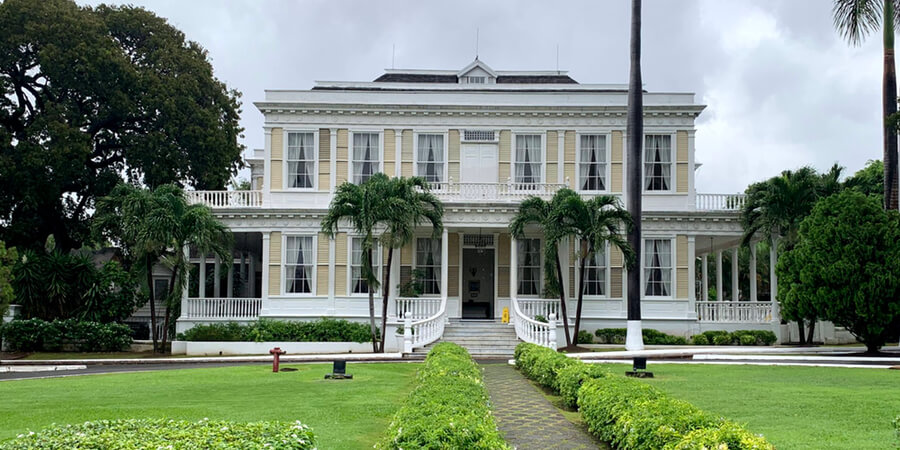 The Georgian architecture was the prevailing style in the motherland of England during Jamaica's sugar plantation era, so it's unsurprising it had a strong influence on the design of Jamaican buildings. In England, the style was a symbol of status and wealth, and as a result, being a visible indication of success, plantation owners and those in position of influence adopted it on the island.

Georgian architecture was the most popular style on the island from the early 1700s to late 1800s. Practical modifications were incorporated to accommodate the environment and weather. It is not a stretch to imagine that the greater the wealth of the owner, the closer the adherence to the architecture and the embellishments.

Generally, public buildings were made of bricks or stone and homes of wood and stone. Bricks were expensive. They were brought in from England as ballast, as was stone, but stone was also available locally and could be cut from rocks such as limestone. The detail of building plans, doors, windows, cornices, staircases were were taken from pattern books from England.

Mixture of Wood and Stone 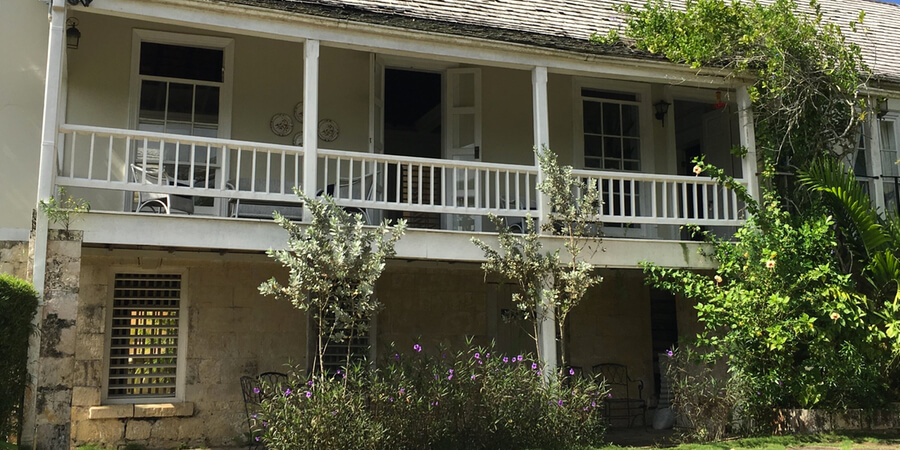 Mixture of stone and wood for external walls. Wood being in abundant supply, upper stories of houses were typically framed in local termite resistant wood, with the ground floor in stone. The upper floors were accessible via interior and exterior staircases. This was practical feature that allowed the interior to be closed off during hot days, without impeding access to both floors from the inside living or outside living spaces. 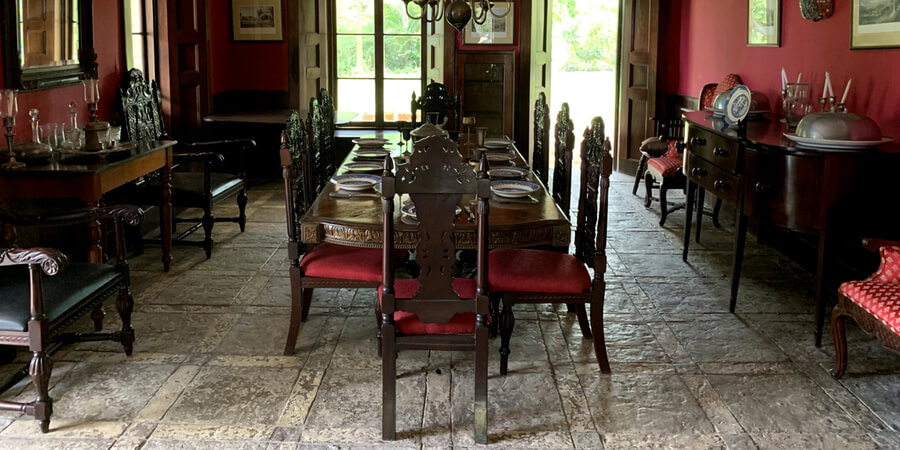 The Bellefield Great House in the hills above Montego Bay, is a good example of the use of stones as a flooring material. These big slabs, help maintain a cooler temperature within the house. The upper floors are accessible via an interior and an exterior staircase. 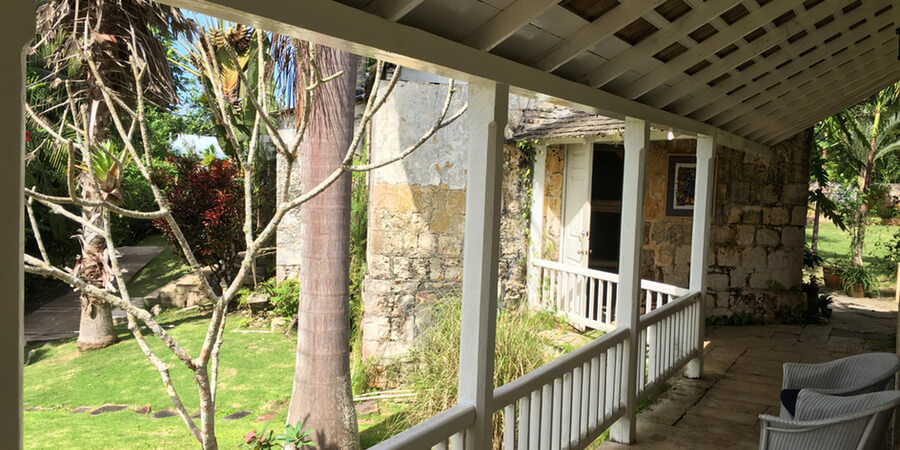 The layout of the building typically positioned the kitchen in such as way as to prevent the smoke and the heat from reaching the living areas of the main dwelling. The kitchen was a detached structure, lowering the risk of fire to the main building. 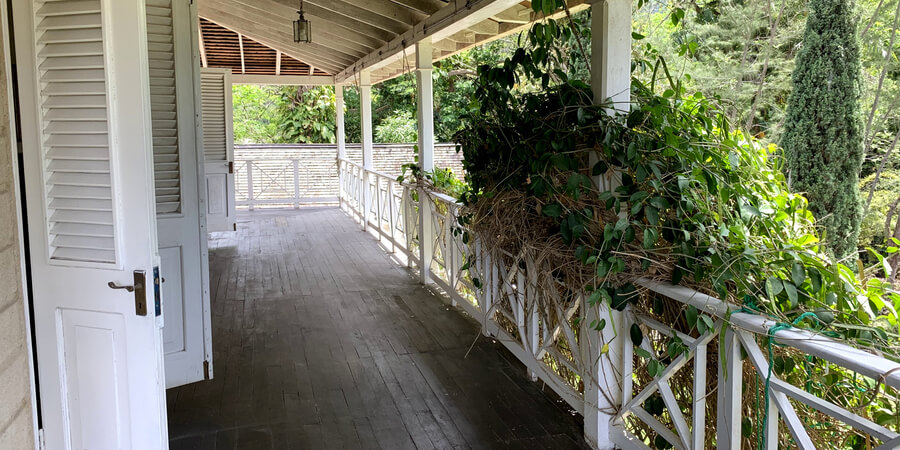 Verandahs were added to help protect openings while providing an "indoor" outdoor living space, without compromising the general rectangular shape of the typical georgian building. The roofs of the verandah were attached to the principal body of the house. The roof above the verandah is vulnerable to high winds. In many cases, the beams of the porch was purposely not connect the beams of the house’s roofing in order to prevent structural damage to the roof of the main structure during hurricanes. Until the 1930s, mahogany shingles were used to cover the roofs, but were then replaced by cedar shingles from Canada as they became more available. 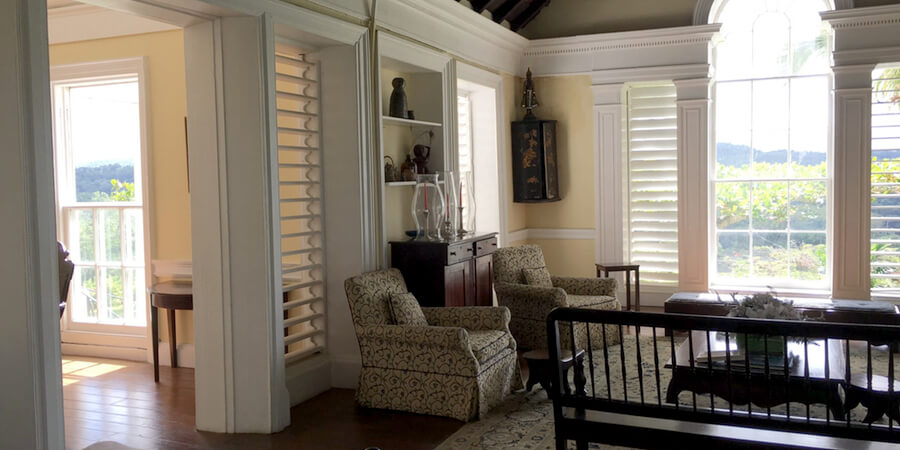 Fenestration: Proportionality and symmetry were maintained and jalousies were incorporated into walls to provide additional protection during hurricanes as well as facilitate ventilation by allowing the cool breeze to permeate the house. In some cases, jalousies were between rooms. The Good Hope Great House is a good example of this; the interior jalousies provide privacy when closed but can be opened to allow an unencumbered flow of breeze between rooms. 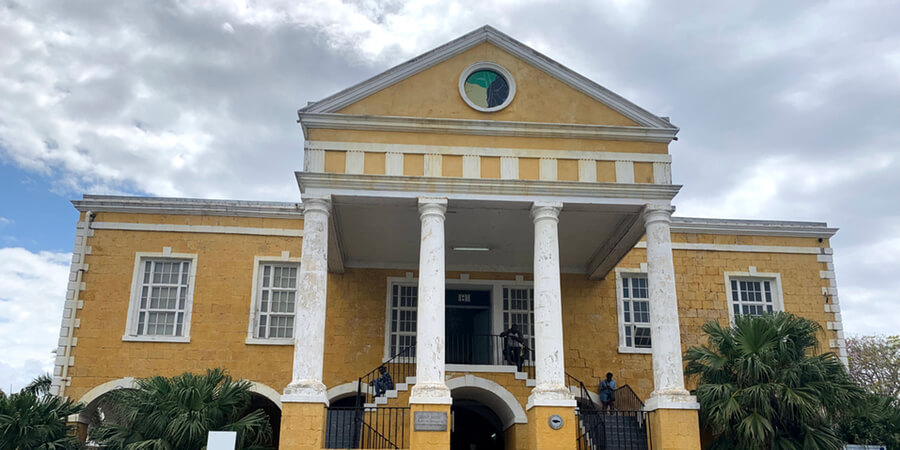 The Falmouth Courthouse features a large pediment propped by pillars over a covered entry way. Crown, cornices and quoins on the corner of the wall provide decorative accents.